Here we all are, at the threshold of a new decade. Do you gaze at the doorway timidly, or do you leap over to the other side with giant steps?

If I look back to the whole decade, life happened with the good and the bad. If I think about my crafts, I will need to check my photo files...

I made a little collage of my years, the best I could. I have files labeled with the years, but sometimes I move around the pictures and now that I look back at the collages, I am sure some of the pictures are not in the right years… but I’ll ignore the mix-ups.

Some of the pictures you have already seen, as this blog has been around since 2005… all the years are already documented here, some more and some less. Let’s have a look… and start from the year 2010. 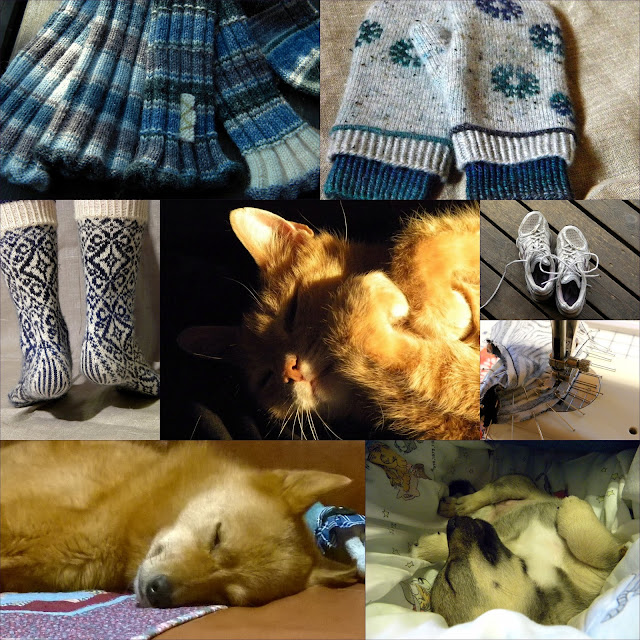 Ruusu was born in 2010 and Mr Kille was still with us. He was such a mellow and nice little cat. We lost Kukka, the happy, mischievious little dog.  And Tina, my soulmate, was by my side.

I knit beautiful colorwork socks, I think the only pair I have ever made in colorwork. There was some very serious sewing (see the amount of pins) and I think I tried double knitting for the first time. The mittens on the right are probably the best mittens I have ever made, they were double knitted and worn to threads, they were so loved. Socks, of course... even made labels for a few pairs. The sneakers are there because that year I walked a lot, walked for hours, and a few times that summer I did 25km trips. 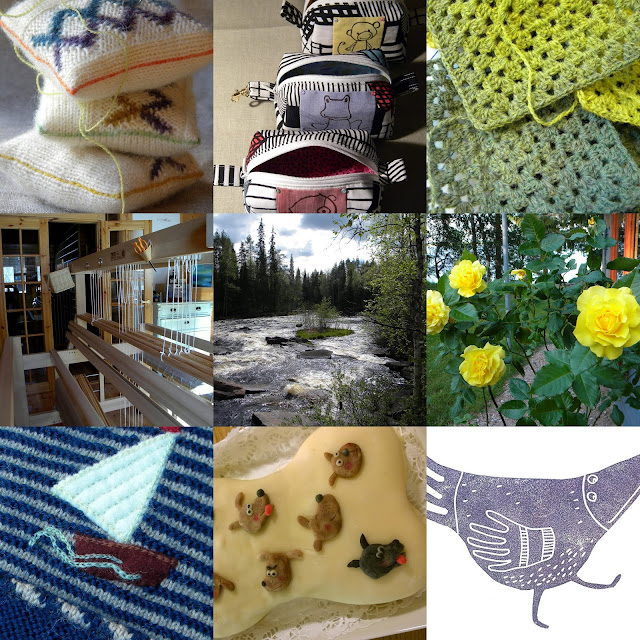 It seems to me that in 2011 I did not have a theme, did various things, even tried my hand in cake making. There was sewing and if I remember correctly, I started to crochet a little bit after a truly long break. I moved my loom upstairs the previous year, and there it has stood ever since. It is such a beautiful loom, I should love her more. I have wanted to make rag rugs for the longest time... maybe soon. 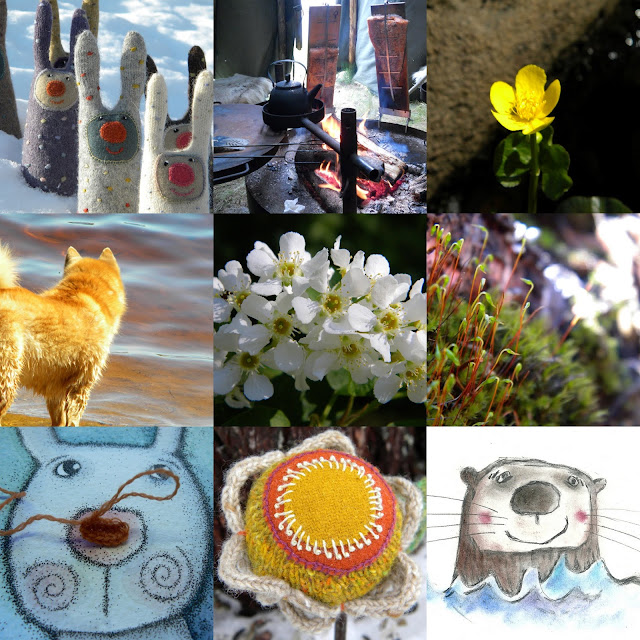 Now, these pictures I am not so sure about. I think I drew a lot and made my first wool flowers back then. And maybe the bunnies too... I so often have things maturing on my table that it is difficult to say when I really made them... my process is so slow. I come up with an idea, make first sketches and maybe even swatches and then the project sits and waits... and waits... sometimes I finish something, but I am not sure if that is good or if it still needs something and so I don't show it to anyone until later... 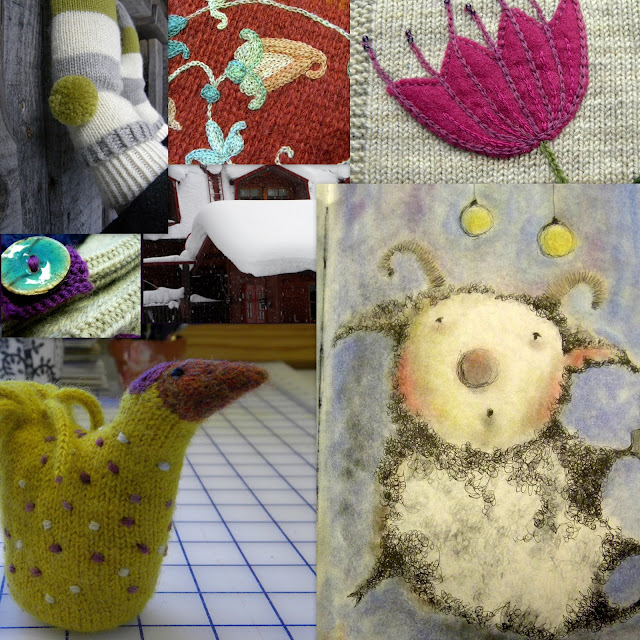 Another batch of pictures that I don't have any memory. I must have made them because they are in 2013 files, but don't recall them at all... except for the embroidery on red, but that picture there must be older... I included it because I still love the embroidery and probably it inspired me to try the wool embroidery that is on the mittens on the right. 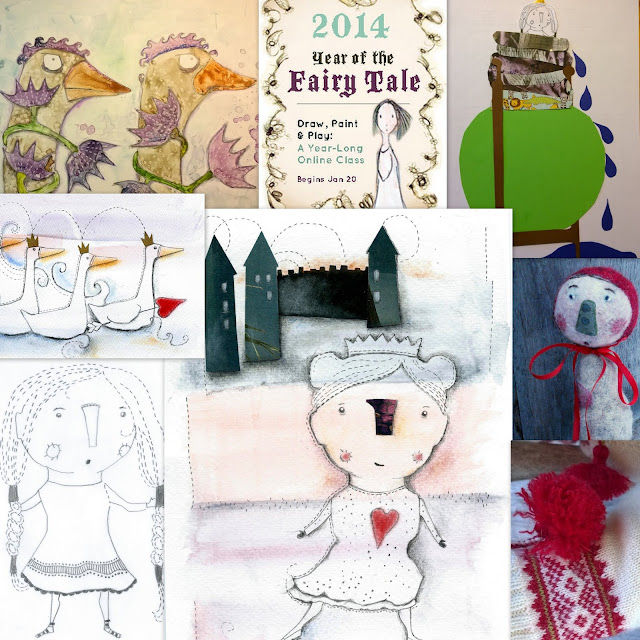 I drew a lot in 2014. I took Carla Sonheim's online course "Year of the Fairy Tale" and all the assignments were interesting and I loved doing them. On the corner in the upper right, there is my illustration for the Princess and the Pea fairy tale. There was some knitting too, but not that much. 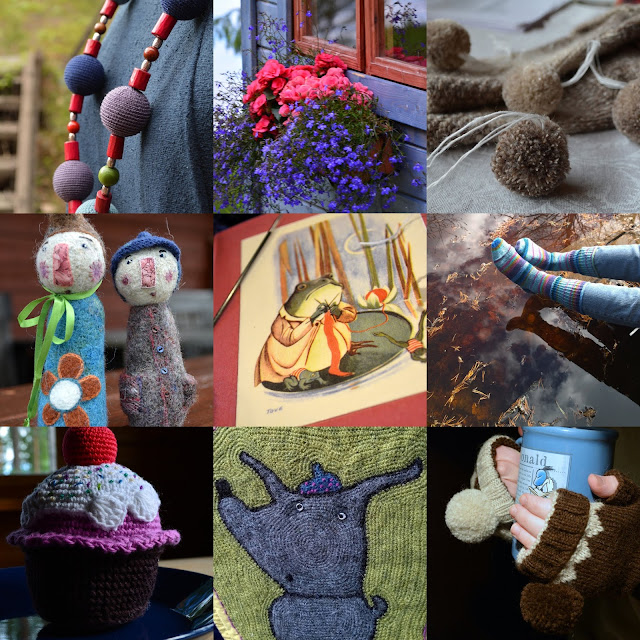 There is needle felting and crochet, a lot more crochet. Some knitting too... I think that little sock picture on the right, is the best sock picture I have ever taken. Actually the file where it was, had many good pictures, and it was difficult to choose the best one. In the other ones, the reflection was even better... hmmm.... I wonder how this slipped into this collage. 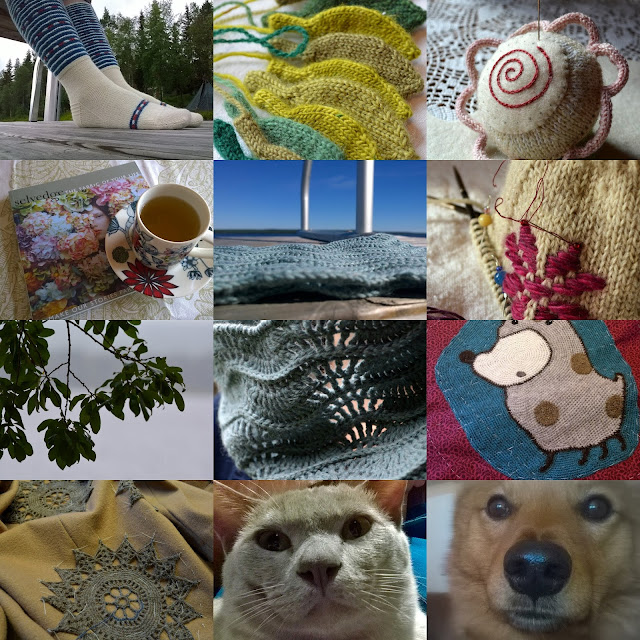 That year had everything in it and it was a year of boys in this house. I had to say farewell for my darling Tina. The charming Burmese Väinö came to live with us. Cat who does not believe in restrictions, he knows how to open doors, he can pull drawers open, obstacles are only hindrances to him and is not tame at all.

Then there is my dear Piki. He is my bodyguard, my little, brave man who is there to watch over the house and to accompany me in my walks. He has a way to look deep into my eyes and I respect him and love him dearly. 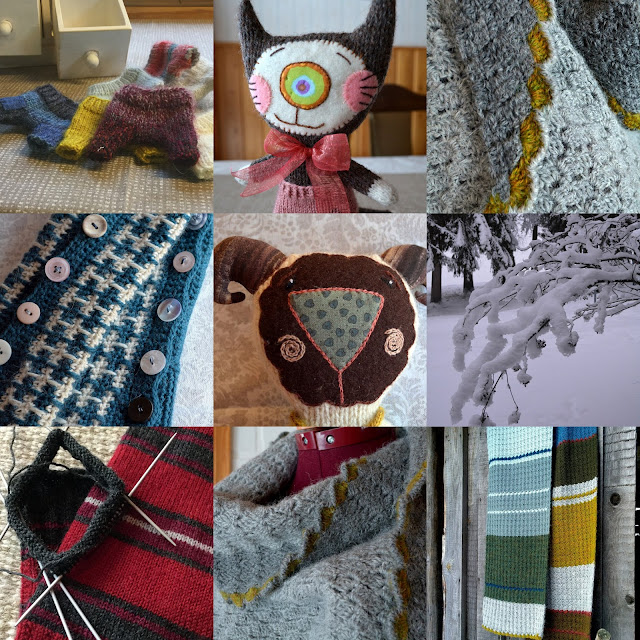 More and more crochet. That year I started to take a close look at my stash and began using it. I also made a commitment not to buy more yarn, unless I really loved it... I cannot not to buy at all, because that would just kill my inspiration... have tried that and it was terrible. There were these lovely red, striped socks and the sheep. I never made him a mate but will remedy that some time soon. I would love to make a collection of sheep, taking the inspiration from specific breeds and use that specific wool for the making. (Must remember this.) 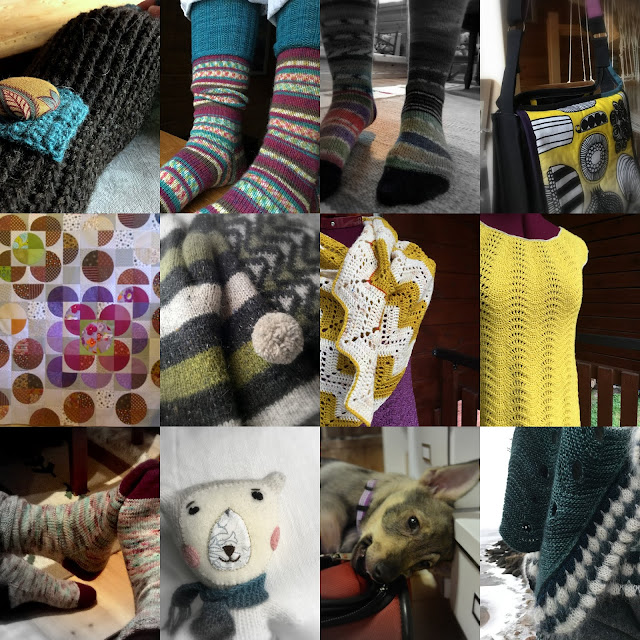 Piisku was born. My sweet little girl. I did various things until Piisku came; she more or less took all of my time... I don't think this year was a good one in being creative. I don't think I came up with anything new... same old, same old and I did not like that at all... I started to worry that my best creating days would be over... and that I would never come up with anything new any more... This thought shadowed a lot of my makings. My doubts and questions weighted on me. 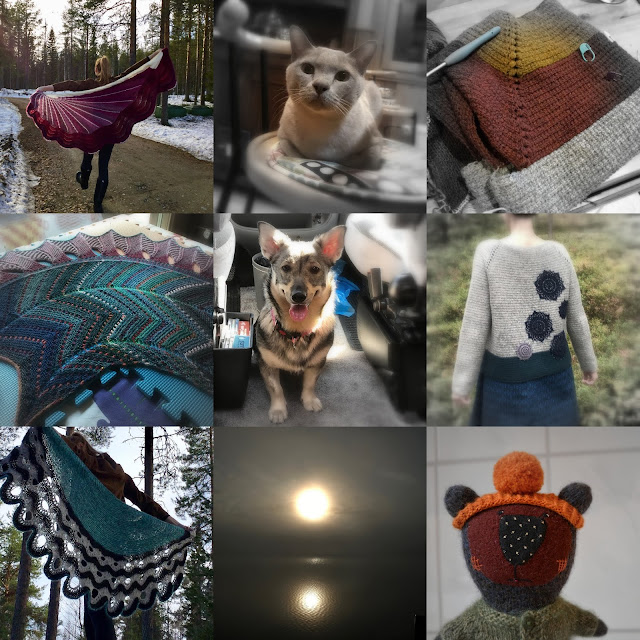 The blog went quiet for months. This year was a difficult one for Piisku and me. We both had health problems, I am almost fine, just need to get accustomed to this new me; but I am not relaxed with Piisku. She seems to be fine, but she was so ill, that I probably will never forget. I almost lost her.

Väinö is there because he provides more than enough inspiration to knit new kittens. I knitted few bears and after much trial and error, finally settled into this look. Made many Westknit shawls and found a new way to love my stash and see its possibilities. This past year was a year of growth. In many ways.

Next year I will turn 60. The theme from 50 to 60 was giving up, letting go and trusting the choices I have made during the past years. All the children moved out and I had to let them go and pick their own ways and make their own choices. This aging body forced me to make adjustments. After 50 I started to think about life coming to an end some day. Where after 50 was saying good byes to many things, the closer I have gotten to 60, the more I have felt that again, there is so much left, there is so much to do and finally there is time to do it. There is even time to breathe, and to stop and to think, and more than ever, I can set aside the musts and just think that the world can wait...


So, let’s cross over to the other side, with brave hearts, because none of us knows what is waiting for us on the other side, and do that in good faith that there is plenty of good.

Once again,
the best wool with you, today and the next decade,
Lene
klo 14:38 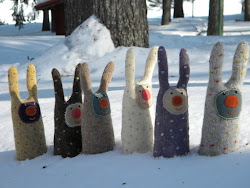